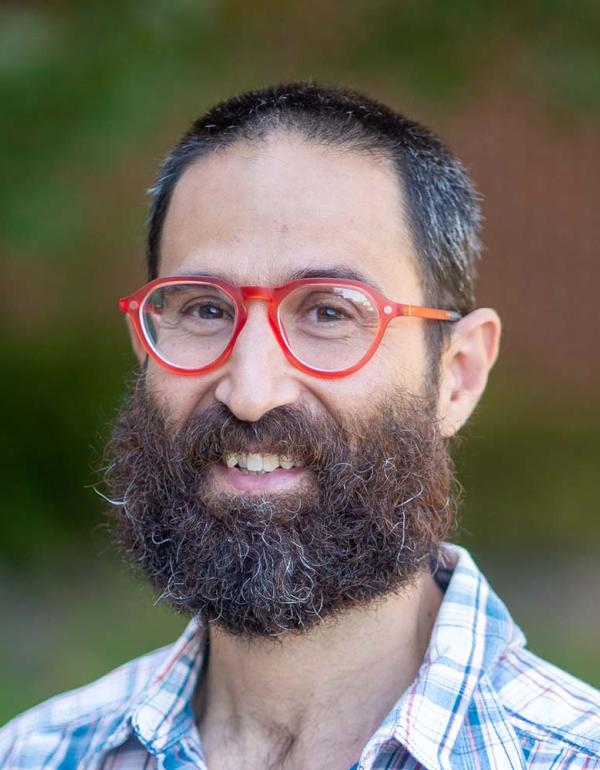 Generally, I want to understand how the output of a neural circuit reflects the behaviors of the individual synapses and neurons that compose it. The mammalian retina is a model circuit well suited to the study of this issue: it is well-characterized anatomically and physiologically, but the nature of synaptic transmission between its component neurons is understood poorly. 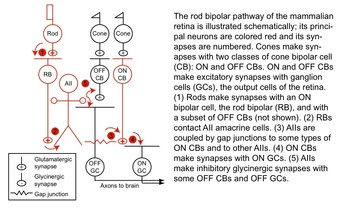 Specifically, my laboratory studies a specialized group of neurons that compose a retinal circuit called the rod bipolar cell pathway (see figure at right). This pathway functions during night vision, and signaling within it begins when rods absorb light. Rods are the receptive cells that are most sensitive to light: single photons can activate rods and cause very small electrical signals to be generated within them. Electrical signals from rods are propagated first to rod bipolar cells, then to AII amacrine cells (AIIs), and finally to ganglion cells, the neurons that project to the brain.
Signaling within the rod bipolar cell pathway is significant because the circuit is sensitive enough to encode small rod signals generated by single photons and flexible enough to encode much larger rod signals that arise from the widely variable light intensities within ever-changing natural scenes. Thus, the rod bipolar pathway exhibits both sensitivity and a wide operating, or dynamic, range. My laboratory studies two aspects of signaling in the rod bipolar pathway: synaptic transmission from rod bipolar cells to AIIs and processing of rod bipolar cell outputs by AIIs and ganglion cells. We assess synaptic transmission by recording neurons' electrical activity. Recordings are complemented by anatomical and computational analyses and ultimately used to understand features of the retina's responses to visual stimuli.
From our studies, we hope not only to understand signaling within the rod bipolar pathway but also to generate a broader understanding of how the properties of neurons and their synapses give rise to circuit behavior. Our work is of interest to sensory neuroscientists specifically and to neuroscientists generally: the former because it relates to the coding of sensory information by ribbon synapses and retinal circuits and the latter because it provides an understanding of the basic principles of synaptic communication between neurons and neural circuit function. As well, our work may provide insights that serve as a basis for therapies for human diseases that affect the first stages of visual processing. Such diseases include retinitis pigmentosa and macular degeneration.